Father Abraham, We are Israel 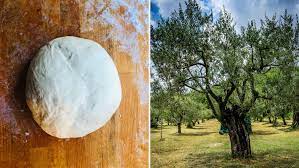 When I was a child I loved the song, “Father Abraham.”  Every week at children’s church I wanted to sing it.  You know the one, where you move your arms, then you march your feet, and nod your head, turn around, and finally sit down.  Being a sure hyper child this was an ingenious song to help work out all that hyper activity before having to sit to listen to a Bible story and missionary story.  But there is another reason I loved this song, and still do.  I love the story of Abraham in the Bible.

The story of Abram and Sarai becoming Abraham and Sarah by listening and obeying God was always so cool.  God told Abram that he would be the father of more children than the stars in the sky and the sands on the seashore.  I love the image this conveys.  But the most amazing thing to me about the story of Abraham is God gave him one son through Sarah to become the chosen Nation.  Israel.  That son was Isaac.  Isaac was the son of promise.  He was only one.  Yet, He had twelve grandsons who became the fathers of the nation of Israel.  God kept his promise to Abraham.  His sons are scattered all over the world now, and are millions.  But, the other really cool thing about Abraham’s children, is that he had other sons not just Isaac.  Did you know he had a son named Ishmael and he also had six other sons, Zimran, Jokshan, Medan, Midian, Ishbak, and Shuah.   All of these sons became great nations as well.  The blessing God gave to Abraham didn’t just affect Isaac.  I love that.  I love wondering if I am actually from one of those nations of Abraham’s sons.  I have no idea if I am. 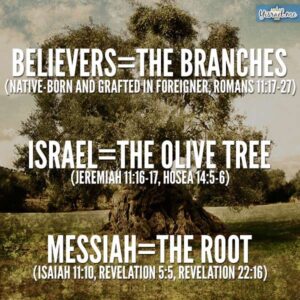 But, I know that Abraham is my father.   Because the Bible tells me so.  This is also one of my favorite parts of the story in the Bible. 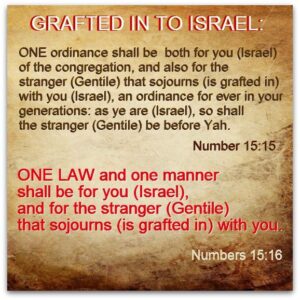 You see when God called Moses to lead the Israelites, the great, great-grandchildren of Abraham, out of Egypt, he explained to Moses that anyone who wanted to become Israel could.  He said, anyone who says, “Yes, I will obey the laws of God,” can become children of God.  So, that means that Abraham is my father, and I am Israel. 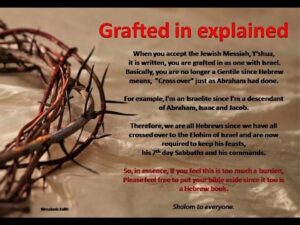 If you don’t believe me check out this passage in scripture.

1 I ask then: Did God reject his people? By no means! I am an Israelite myself, a descendant of Abraham, from the tribe of Benjamin.

2 God did not reject his people, whom he foreknew. Don’t you know what Scripture says in the passage about Elijah—how he appealed to God against Israel:

3 “Lord, they have killed your prophets and torn down your altars; I am the only one left, and they are trying to kill me” ?

4 And what was God’s answer to him? “I have reserved for myself seven thousand who have not bowed the knee to Baal.”

5 So too, at the present time there is a remnant chosen by grace.

6 And if by grace, then it cannot be based on works; if it were, grace would no longer be grace.

7 What then? What the people of Israel sought so earnestly they did not obtain. The elect among them did, but the others were hardened,

9 And David says: “May their table become a snare and a trap, a stumbling block and a retribution for them.

10 May their eyes be darkened so they cannot see, and their backs be bent forever.”

11 Again I ask: Did they stumble so as to fall beyond recovery? Not at all! Rather, because of their transgression, salvation has come to the Gentiles to make Israel envious.

13 I am talking to you Gentiles. Inasmuch as I am the apostle to the Gentiles, I take pride in my ministry

14 in the hope that I may somehow arouse my own people to envy and save some of them.

15 For if their rejection brought reconciliation to the world, what will their acceptance be but life from the dead?

16 If the part of the dough offered as firstfruits is holy, then the whole batch is holy; if the root is holy, so are the branches.

17 If some of the branches have been broken off, and you, though a wild olive shoot, have been grafted in among the others and now share in the nourishing sap from the olive root,

18 do not consider yourself to be superior to those other branches. If you do, consider this: You do not support the root, but the root supports you.

19 You will say then, “Branches were broken off so that I could be grafted in.”

20 Granted. But they were broken off because of unbelief, and you stand by faith. Do not be arrogant, but tremble.

21 For if God did not spare the natural branches, he will not spare you either.

22 Consider therefore the kindness and sternness of God: sternness to those who fell, but kindness to you, provided that you continue in his kindness. Otherwise, you also will be cut off.

23 And if they do not persist in unbelief, they will be grafted in, for God is able to graft them in again.

24 After all, if you were cut out of an olive tree that is wild by nature, and contrary to nature were grafted into a cultivated olive tree, how much more readily will these, the natural branches, be grafted into their own olive tree!

25 I do not want you to be ignorant of this mystery, brothers and sisters, so that you may not be conceited: Israel has experienced a hardening in part until the full number of the Gentiles has come in,

26 and in this way all Israel will be saved. As it is written: “The deliverer will come from Zion; he will turn godlessness away from Jacob.

27 And this is my covenant with them when I take away their sins.”

29 for God’s gifts and his call are irrevocable.

30 Just as you who were at one time disobedient to God have now received mercy as a result of their disobedience,

31 so they too have now become disobedient in order that they too may now receive mercy as a result of God’s mercy to you.

32 For God has bound everyone over to disobedience so that he may have mercy on them all.

33 Oh, the depth of the riches of the wisdom and knowledge of God! How unsearchable his judgments, and his paths beyond tracing out!

34 “Who has known the mind of the Lord? Or who has been his counselor?”

35 “Who has ever given to God, that God should repay them?”

36 For from him and through him and for him are all things. To him be the glory forever! Amen. 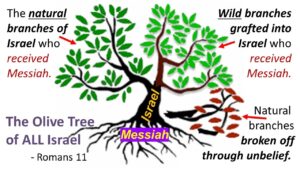