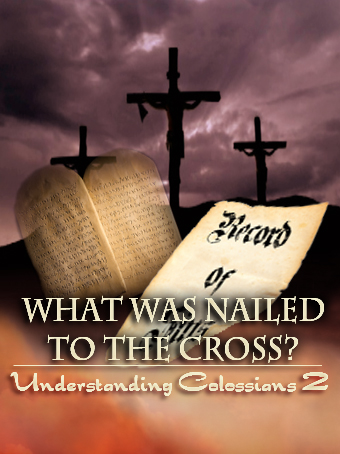 In my last post, I concluded with the question did Jesus do away with the law or part of the law?  Here is the passages I was looking at.  Today I want to take a close look at these scriptures to see if it is wrong to continue ot keep the laws given to Moses in the dessert for God’s people.  Let’s look again at Jesus words in Mathew first.

13“You are the salt of the earth; but if the salt has become tasteless, how can it be made salty again? It is no longer good for anything, except to be thrown out and trampled under foot by men.

14“You are the light of the world. A city set on a hill cannot be hidden; 15nor does anyone light a lamp and put it under a basket, but on the lampstand, and it gives light to all who are in the house. 16“Let your light shine before men in such a way that they may see your good works, and glorify your Father who is in heaven.

17“Do not think that I came to abolish the Law or the Prophets; I did not come to abolish but to fulfill. 18“For truly I say to you, until heaven and earth pass away, not the smallest letter or stroke shall pass from the Law until all is accomplished. 19“Whoever then annuls one of the least of these commandments, and teaches others to do the same, shall be called least in the kingdom of heaven; but whoever keeps and teaches them, he shall be called great in the kingdom of heaven.

20“For I say to you that unless your righteousness surpasses that of the scribes and Pharisees, you will not enter the kingdom of heaven.

Why would Jesus say these things if He did not want us to abide by His complete law to the best of our ability.

Recently, a friend in love shared with me tow passages that she believed made it clear that I should not try and keep the Biblical feasts in the book of Leviticus 23.  Here are the two passages.

by abolishing in His flesh the enmity, which is the Law of commandments contained in ordinances, so that in Himself He might make the two into one new man, thus establishing peace,

having canceled the charge of our legal indebtedness, which stood against us and condemned us; he has taken it away, nailing it to the cross.

Before I dig deep into these verses, let me say again I am just a sinner saved by grace, I do not claim to have all the answers.  Like you, I am on a journey and seeking Truth with all my heart.  So, as you read my conclusions please, take out your Bible and seek the Holy Spirit and allow God to lead you to His Truth.  May we all continue ot grow and learn in His Word.

LEt’s start by looking at the Ephesians 2 verse.  I like to read the letters of the Apostles from start to finish as if it were a letter written to me.  So, let’s do that first.  Ephesians

Once you have read the whole letter from beginning to end lets go back and just look closely at the verse in question.

Therefore remember that formerly you, the Gentiles in the flesh, who are called “Uncircumcision” by the so-called “Circumcision,” which is performed in the flesh by human hands— 12 remember that you were at that time separate from Christ, excluded from the commonwealth of Israel, and strangers to the covenants of promise, having no hope and without God in the world. 13 But now in Christ Jesus you who formerly were far off have been brought near by the blood of Christ. 14 For He Himself is our peace, who made both groups into one and broke down the barrier of the dividing wall, 15 by abolishing in His flesh the enmity,  the Law of commandments in ordinances, so that in Himself He might make the two into one new man, thus establishing peace, 16 and might reconcile them both in one body to God through the cross, by it having put to death the enmity. 17 And He came and preached peace to you who were far away, and peace to those who were near;18 for through Him we both have our access in one Spirit to the Father.19 So then you are no longer strangers and aliens, but you are fellow citizens with the saints, and are of God’s household, 20 having been built on the foundation of the apostles and prophets, Christ Jesus Himself being the corner stone, 21 in whom the whole building, being fitted together, is growing into a holy temple in the Lord, 22 in whom you also are being built together into a dwelling of God in the Spirit.

“…and regard the patience of our Lord as salvation; just as also our beloved brother Paul, according to the wisdom given him, wrote to you, 16as also in all his letters, speaking in them of these things, in which are some things hard to understand, which the untaught and unstable distort, as they do also the rest of the Scriptures, to their own destruction. 17You therefore, beloved, knowing this beforehand, be on your guard so that you are not carried away by the error of unprincipled men and fall from your own steadfastness…”

Paul the writer of Ephesians and Colossians is a very well educated Jew.  His understanding of Jewish customs and the Law of God is very advanced.  So, even in his own time the early church had a hard time following his teaching.  So, we too of course, many hundreds of years later are going to find it difficult.  But we can always trust that God’s Word will not contradict itself.

Now let’s look at the verse in question closely.

When we look closely at this verse we see it is a part of a long sentence about the barrier wall being broken down.  The barrier wall was a wall in the temple building that separated the Jews from the Gentiles.  The Israelites often forgot to obey God’s laws and after the Jews returned to the Promised land they  never wanted to forget again.  So, the leaders of the church, made lots of rules to go with God’s law to help them not accidentally disobey or fall into sin again.  One of these fence laws was to remain separate from non-Jews even if they wanted to follow YHVH.  These are the laws Paul is talking about.

Now let’s look a the Colossians verse to see if this is the same teaching.  This passage makes it very clear that Paul is indeed talking about the written laws added by the Jewish leaders.  Here is the passage in context.

When you were dead in your transgressions and the uncircumcision of your flesh, He made you alive together with Him, having forgiven us all our transgressions, 14having canceled out the certificate of debt consisting of decrees against us, which was hostile to us; and He has taken it out of the way, having nailed it to the cross. 15When He had disarmed the rulers and authorities, He made a public display of them, having triumphed over them through Him.

I have highlighted verse 15.  This verse tells us who wrote the law that was nailed to the cross.  I will say here that I did study both these passages out in the Greek, and the words in Greek make it clear it is not the LAW of YHVH, the Torah or any part of the Torah that was nailed to the cross.  The Greek Word is a a word that is for man made laws and decrees usually referring to the law of Caesar.

So, my conclusion is this, and I want to say again I am not authority, that the Law nailed to the cross was NOT the LAW of YHVH.

In my next post, I will address why I think the feast laws are for us today.